During this unprecendented time, we are fully operational and available to serve you. Stay home and Stay safe.

The community of Southend in Northeastern Saskatchewan has produced a number of junior “A” hockey players that have played in both the SJHL and MJHL in the past generation. That is remarkable considering the remoteness of the community, a small population of 1300 and not having had an indoor arena for several years. That is, until now.

Norseman Structures is the proud supplier of a 100' wide x 180' long hockey arena to the Peter Ballantyne Cree Nation community of Southend. The grand opening of the ‘Henry Cook Memorial Arena’ was held on March 21, 2014.

Norseman worked closely with the band on the design and plans for the arena and were involved in coordinating many of the arena’s components including foundation, boards, glass, scoreboard, electrical and even the zamboni.

The building was up and useable in 3 weeks allowing local hockey players and fans inside to make the most of the hockey season. The rink is in use from 7am to 11pm during hockey season and there are future plans for ball hockey and special events in summer months.

“I have to say I admire all the hard work they’ve put into this,” said David Kelso of Councillors Simon Jobb and Kevin Morin. “We worked really well together. We put the building up in three weeks to ensure we would meet the deadline for the grand opening and to allow the kids to skate this winter.”

Kelso adds, “At the end of the day we got the job done, so on behalf of Norseman Structures, thank you for the opportunity to partner with Southend and we look forward to meeting the next Sydney Crosby.” 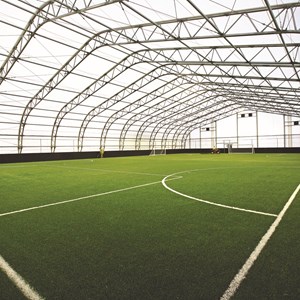