For nearly ten years Kelly & Heidi Adams, owners' of K & K Training Stables, dreamt of owning a fabric covered riding arena. In September 2010, after years of research, a promotion offered by Norseman Structures brought their dream to reality and in March 2011, they saw the construction of a 62' wide x 60' long QL-Series riding arena on their ranch in Mortlach, Saskatchewan, Canada.

K & K Training Stables use their riding arena as a year-round horse training stable. They have begun hosting horse retreats (people working with horses instead of riding) and in the future hope to offer educational classes - inviting trainers and presenters from the equestrian industry. One of the greatest advantages to owning this type of structure is the opportunity to extend business beyond summer months.

The Norseman Structures building is an addition to a pre-existing wood barn and the outcome of the entire structure has been superior. "We really like the gussets that attach the cover to the barn because it makes the building weatherproof. It all just came together like a jigsaw puzzle," commented Heidi Adams, "we would have built a longer structure, but we were limited because of our natural gas line."

The building is mounted on a 5' foot pony wall and according to Heidi Adams, "It is very nice having that extra 5' of clear-span space, and with the natural light, openness and airflow, we have a very nice working environment." For added functionality, the Adams' had a 12' x 12' overhead door installed in the north end of the building, opposite the barn. This door lets additional air flow through the barn and allows them to drive through the entire structure when putting hay in the barn.

"The building is cooler in the summer and we've noticed less dust, fewer distractions and the horses are very comfortable. We haven't had the need for artificial lighting at this point, which saves money during the day. All in all, everything just works better," said Adams. Community response has been positive and has raised awareness for the business. "We are located 1/2 mile south of the #1 highway and the building is visible for nearly 3 miles off the highway. We've noticed sometimes people deliver things, just to get a look inside," said Heidi.

According to Heidi, "The Norseman Structures sales people were phenomenal. I loved the service and customer commitment - they kept coming back until the job was completed to our satisfaction. I also enjoyed working with the internal staff on the engineering to match the building to the barn."

Kelly and Heidi Adams plan to work with Norseman Structures again in the future. "We love our building and we plan to purchase another 100' x 120' (30.5m x 36.6m) to be used as a local equestrian facility and large community center. We're hoping to gather investors and pull together a business that is useful for all people involved in the industry and beyond." In addition to the equestrian uses for a large indoor riding arena, Heidi would like to see the future building utilized for dances, community functions, 4-H, auctions and other events. 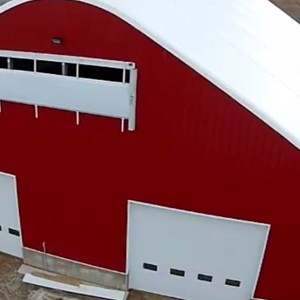